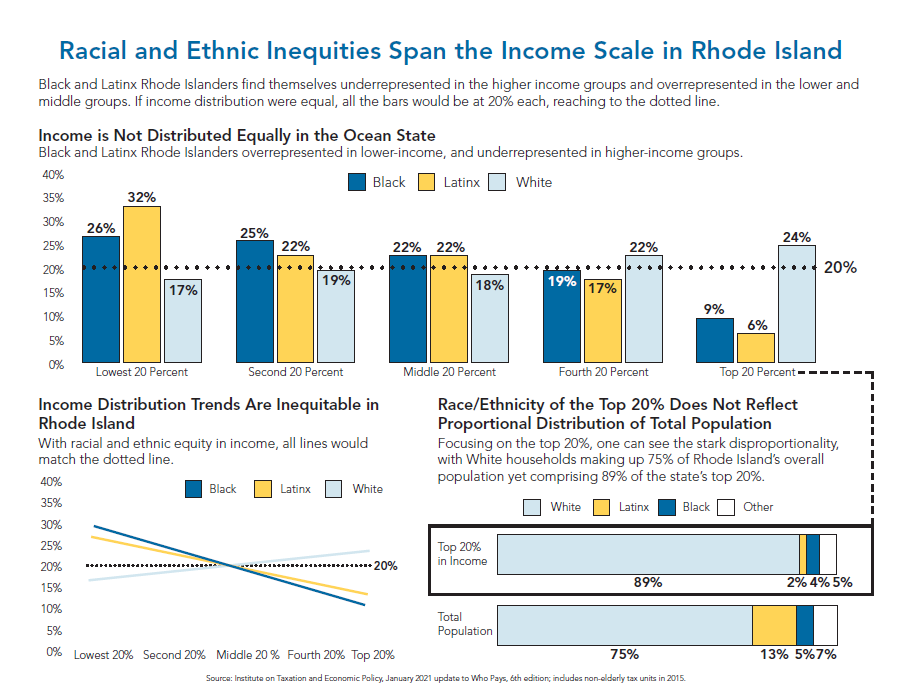 Today, Tax Day 2021, is a good time to reflect on the inequitable distribution of wealth and income caused by decades of policies that disadvantaged people of color. A new report, “Taxes and Racial Equity: An Overview of State and Local Policy Impacts,” published by the Institute for Tax and Economic Policy (ITEP), highlights how racism and discrimination have permeated our society, “impacting the housing market, labor market, financial industry, educational systems, criminal justice, and other areas.” As the ITEP report explains “this has prevented people of color from building wealth on the same level as white families.” The report notes that whereas Black Americans constitute 13 percent of the U.S. population, they possess 4 percent of the wealth. Compared to the median white household, the median Black household has only 2 percent of the wealth.

Decades of racist tax and other public policy—such as redlining for providing and denying mortgages—have resulted in large racial and ethnic disparities in both income and wealth across the country. Tax policies on the state and local levels play a role in maintaining or even worsening the existing wealth and income gaps. 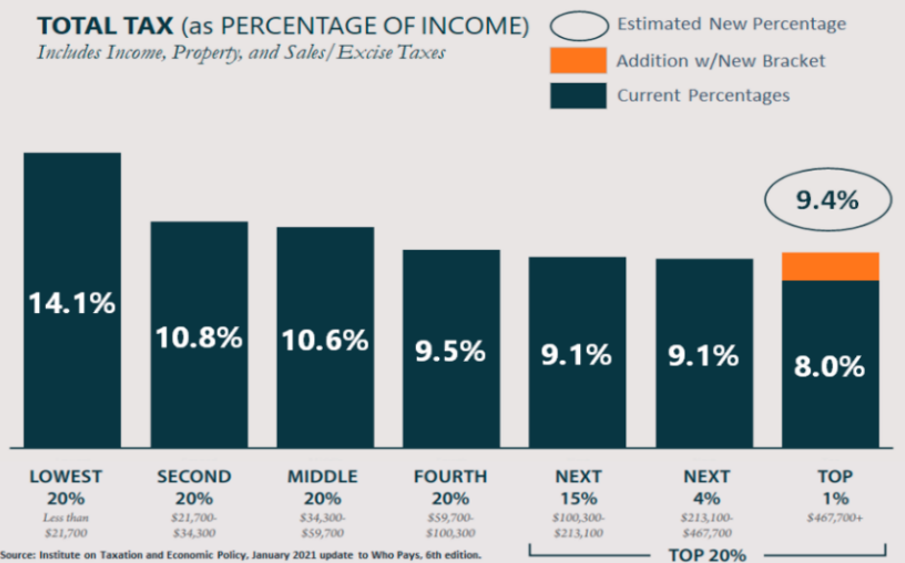 As the ITEP report reminds us, “[i]ncome taxes can help to address income inequality by asking more of families with higher incomes, thus narrowing post-tax income gaps between high and low-income taxpayers.” Rhode Island’s overall tax system could be more progressive, with those at the top end, disproportionately white, paying a slightly higher percentage of their income in overall state and local taxes.

State and local tax policy not only help create and maintain inequities but can be a tool to decrease these inequities. According to ITEP, “[s]tate and local tax policies interact with this severe inequality in important ways. Revenues raised through taxes are vital to funding public investments in education, health, and the safety net, all of which can help combat inequality. But some state tax systems exacerbate racial income inequality by taxing low-income people, a disproportionate share of whom are people of color, at higher rates than other families.”

Racial and ethnic inequities are not merely an issue of income and wealth, but of revenue and spending as well. Proposals to increase taxes on those with the largest incomes will decrease the racial and ethnic income gap in Rhode Island in two ways: by changing how much a few at the top pay in taxes, while providing revenue to invest in a more equitable society. As the ITEP report explains, “Raising income taxes to lessen reliance on regressive sales and excise taxes can help state tax systems move toward easing the racial income divide, or at least not worsening it. Taxing the rich at higher rates is arguably the most important thing state and local government can do to improve racial equity in their tax codes both because of the direct effect of the tax on narrowing income divides and because of the public investments made possible by the revenue that such a reform can raise. Higher taxes on top earners, a group that is disproportionately White, allow states to use their tax codes to reduce racial inequity.”

"This data highlights why the legislation introduced by Representative Alzate and Senator Murray to increase taxes on income over $475,000, affecting only the top 1%, is not only a commonsense approach to addressing the state's ongoing structural deficit, but also will address racial and ethnic disparities," said Rachel Flum, executive director of EPI.