Rhode Island’s poverty rate remained unchanged in 2014 at 14.3 percent, according to data released by the US Census Bureau. Poverty remained high in the Ocean State as the slow rate of economic recovery continued to take a toll on Rhode Island families.

With one in seven Rhode Islanders living beneath the federal poverty level (about $24,000 for a family of four), basic necessities like decent housing, healthy food, and quality child care remain out of reach.

More than 145,000 Rhode Islanders – one in seven – lived in poverty in 2014, according to new Census Bureau data, with Rhode Island’s poverty rate of 14.3% falling slightly lower than the national average of 15.5%.  Among the New England states, the Ocean State had the largest share of its residents living in poverty last year, while New Hampshire again was the state with the lowest poverty rate, at 9.2 percent. 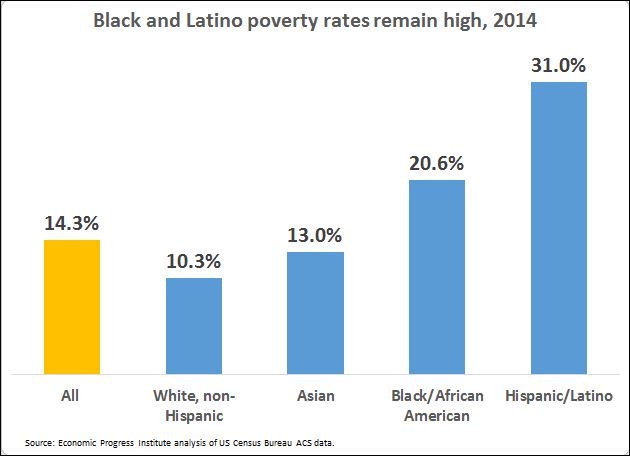 Rhode Island’s communities of color faced higher levels of poverty in 2014, with 20.6  percent of Blacks and 31.0 percent of Ocean State Latinos living in poverty last year.  White and Asian Rhode Islanders experienced lower rates of poverty, at 10.3 and 13.0 percent respectively.

While Rhode Island’s poverty rate appears to have stabilized (albeit at a level that remains far too high), its median household income continues its downward trend.  The state’s median annual income, when adjusted for inflation, was $54,891 a year, remains significantly less than (inflation adjusted) pre-recession median household income of $61,159, and down from its recent peak of $62,870, in 2003.