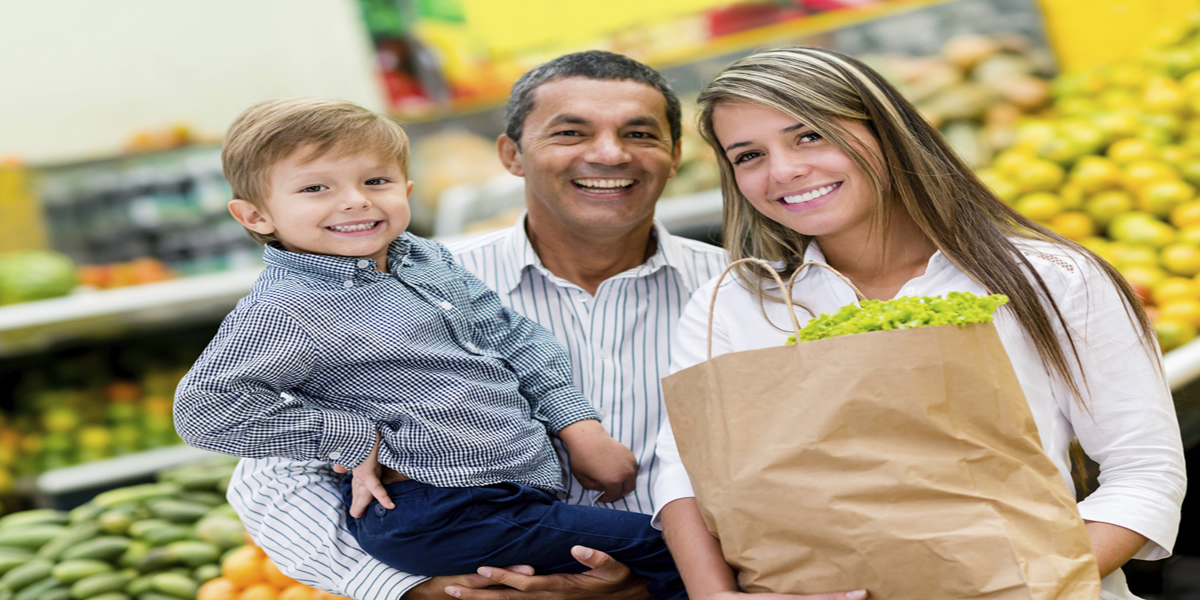 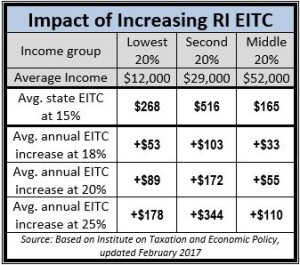 All Rhode Islanders want to be able to support their families and live in thriving communities. Yet, far too many working Rhode Islanders are struggling to pay for housing, heat, food, and health care.  Increasing Rhode Island’s refundable Earned Income Tax Credit (EITC) would put more money back in the pockets of working families, improving their ability to meet their basic needs. When these families spend their money at local supermarkets and shops they provide a boost to their local economies.

The EITC is a common sense tax break that reduces the income tax owed by low-wage working families, allowing them to keep more of their paycheck. Filers receive a federal EITC based on their income and family size. The state EITC is a percentage of the federal credit.

When home health aides, restaurant workers, and local fishers can better provide for their families, our communities and our economy are stronger, and prosperity is broadly shared.

The EITC is good for local businesses and our state’s economy
The EITC generates “multiplier” effects that reverberate through the local economy and become income for other local businesses, employees and governments. Mark Zandi, a renowned national economic forecaster from Moody’s Analytics, assumes a “multiplier effect” for refundable tax credits to low-income earners in the range of 1.22 to 1.26, meaning that every dollar spent generates an additional $1.24 (approximately) in economic activity. Applying that multiplier to a state EITC set at 20 percent of the federal credit would add $46.9 million to the economy, $11.7 million more than added with the current 15 percent EITC.

Workers who receive the EITC already pay a lot in taxes
Like all residents, workers who receive the EITC pay payroll taxes, sales and property taxes, and other taxes and fees. Rhode Island’s lowest income families pay nearly twice as much of their income towards state and local taxes as the wealthiest Rhode Islanders[i]. Increasing the state’s Earned Income Tax Credit helps improve tax fairness.

An EITC is increasingly important in the Ocean State’s economy
A significant number of jobs in Rhode Island pay low wages. Of the 50 occupations expected to produce the most job openings by 2022, nearly one in four will pay less than $12.38 per hour, the amount that the Economic Progress Institute finds a single adult needs to earn to meet his or her most basic expenses[ii]. An increased EITC allows low-wage workers to keep more of their pay, bringing much-needed income back to their households.

An increased state EITC is important to workers of color
Some Rhode Islanders are more likely to be working in lower- paying jobs than others. The median household income for African-Americans ($36,719) and Latinos ($35,455) is well below whites ($64,284), making it more likely that these workers will benefit from an increased state EITC[iii]. Latinos, in particular, are over-represented among EITC filers. More than one in nine of Rhode Island’s labor force is Latino, but nearly one in four of the EITC-eligible population in the state is Latino[iv].