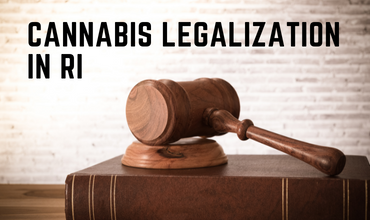 Three proposals to legalize cannabis for adult recreational use in Rhode Island were presented during the 2021 legislative session: Senate Bill 568, House Bill 6370, and Article 11 of Governor McKee’s proposed FY2022 budget. The proposals are estimated to yield around $17M annually. Rhode Island legalized cannabis for medical use in 2006 and decriminalized possession of small amounts of cannabis beginning in 2013. Nineteen states, including MA and CT, have legalized cannabis for recreational use. Federal legislation to legalize use has also been introduced.

As RI considers legalization, to protect its share of the market and to raise revenue, it must implement a legislative framework that maximizes racial equity, since racism is the root cause of why cannabis is illegal today. Cannabis was legal and used for medicinal and other purposes throughout the U.S. until the early 1900s, when an increase in
Mexican immigration occurred. Soon after, government leaders and media began to spread lies that smoking cannabis caused those from Latinx and Black communities to become violent and insane. Stoking this xenophobia and racism was a purposeful means of targeting people of color rather than cannabis itself. Since the 1930s, cannabis criminalization has acted as a catalyst for the incarceration of Black and Latinx individuals and contributed to mass incarceration after Nixon’s 1970s declaration of the War on Drugs. In 2010, Black Rhode Islanders were 2.59 times more likely than White Rhode Islanders to be arrested for cannabis possession. Even after partial decriminalization, evidence suggests citations were issued disproportionately to Rhode Islanders of color.

This summary outlines, for the three proposals under consideration, four areas that yield racial equity
concerns: (1) Regulatory & Advisory Authority; (2) Expungement of Criminal Records; (3) Access to the Legal
Market; and (4) Uses of Revenue. In addition, this summary reviews the proposals’ methods to tax cannabis.